How has it come to this? It’s 2020, and on top of everything else (a global pandemic, an incompetent and megalomaniacal U.S. president, police in my neighborhood murdering Black people, riots in my neighborhood over police murdering Black people, climate change-induced forest fires destroying California, murder hornets), my MacBook Pro has suddenly decided that it must try to send audio output to my HDMI monitor whenever it’s plugged in, even though the monitor doesn’t have speakers, and I have a set of speakers plugged into the headphone jack.

It’s a completely asinine scenario, and the solution is even more asinine, but it does seem to work. It also maybe just fixes one annoying issue I always had with my speaker setup: I would have to turn the Mac’s volume all the way up to get adequate output to the speakers, which have their own volume control.

What’s the solution? Create an aggregate device. What’s that? I’ll show you.

First go into Applications > Utilities and open Audio MIDI Setup. Hopefully you’ve never had to open this little utility before, because I doubt anyone who works in interface design at Apple ever has. (ZING!)

You’ll see something like this… but without the last item, which is the aggregate device I already created, much like a TV chef who already has a finished dish waiting in the oven. 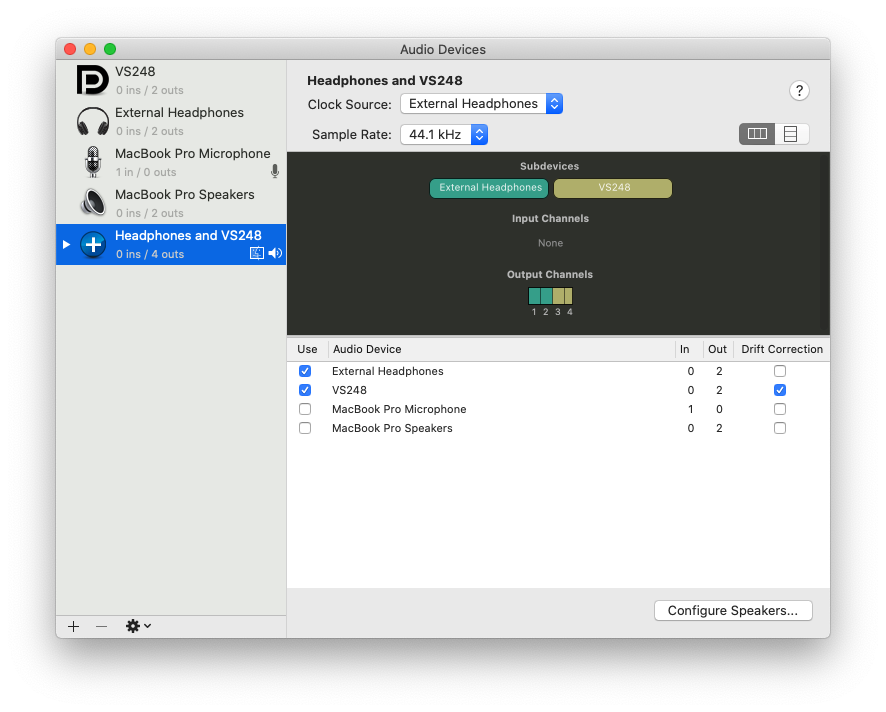 That “VS248” is my HDMI monitor. “External Headphones” is my speakers, plugged into the MacBook Pro’s headphone jack. Then of course there are the internal microphone and speakers of the Mac itself.

Click the little plus sign at the bottom left, and choose Create Aggregate Device. Click the checkboxes under Use for “External Headphones” and your monitor. That will make them appear in Subdevices above. When I did this, it had VS248 on the left and External Headphones on the right, which was assigning the monitor to channels 1 and 2, and the headphones to channels 3 and 4. You can drag-and-drop the names of the devices to change the order. Move your External Headphones to the left so their color is assigned to channels 1 and 2. You can also give this aggregate device a distinct name by clicking its name in the left sidebar and typing in what you want. I cleverly called mine “Headphones and VS248.”

That’s it! Now close this window, open System Preferences, and click on Sound > Output. Select your new aggregate device for sound output, and you should be all set. 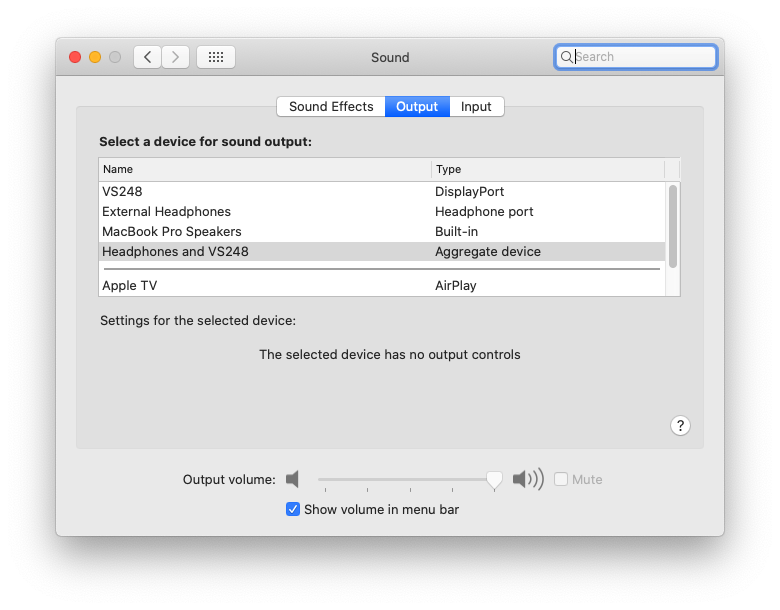 One thing I noticed about this that was initially annoying, but then I realized is actually a good thing! was that now the volume control and mute “buttons” on my MacBook Pro’s Touch Bar were grayed out. Damn it! Oh, wait. That’s actually fine, because this aggregate device is automatically setting the output on the headphone jack to maximum, allowing me to easily control the volume in the speakers with the speakers’ volume knob. I no longer have to manually turn the Mac up to maximum. And, hopefully, although I haven’t tried it yet, this also means that when I take my Mac away from my desk and plug my earbuds directly into the headphone jack, I won’t have to remember to adjust the volume before blowing out my eardrums! The Mac should remember the optimal volume I already have set for when the sound output is External Headphones-only.

Although I’m a musician with (I think) a fairly good ear, I’ve spent most of my life listening to music on cheap equipment, mostly because I couldn’t bring myself to do something so foolish as throw $200 at a pair of headphones. But the more I produce my own music and strive for sonic perfection, the more incongruous it becomes that I’m mastering my recordings on a pair of $20 Sony earbuds. (Although I have to say, they’re pretty decent for $20 earbuds… good enough that I own three pairs of them!)

Anyway, the stars aligned this month for me to finally take the plunge and foolishly throw that $200 at a pair of headphones. Initially I succumbed to both my impulsive nature and a fair bit of effective marketing and bought a pair of Beats by Dr. Dre Solo HD headphones for $200 at the Apple Store. Although I was impressed with some of the details of the product, it wasn’t long before I realized that more care had been put into the packaging and trivial aspects like a detachable red cord than into what really matters: a balanced sound and comfortable design.

Put simply, the things sounded muddy and gave me a splitting headache after 20 minutes of use. Seeing a parade of music industry tools on American Idol gratuitously sporting Beats headphones (among other branded accessories like baseball caps) was the nail in the coffin.

Fortunately, the Apple Store has a good return policy, and a week after buying them I had brought them back for a full refund. (No restocking fee!) And now I had $200 burning a hole in my pocket again. But this time I decided to do my research. I decided to go with Sennheiser, and I studied their various offerings both on their own website and on Amazon.

Now is a good time to buy Sennheiser headphones on Amazon. They’ve recently updated their product line, and Amazon seems to have ample inventory of the previous generation, which they’re selling at massive discounts. I settled on the HD555 audiophile headphones, as a nice balance between quality and price. Only $85!

But, after I placed my order, I began to discover how little I know about audiophile headphones. The HD555s have open cans, meaning there’s an outer grille rather than a solid enclosure, which allows air in to help the speakers vibrate, but therefore it also lets sound in… and out. These are not good headphones for private listening in a public place, or for drowning out external noises. So I began exploring other options. I found that Amazon also offered the closed-can Sennheiser HD448s for $100. Since I was already $115 ahead on the deal, I decided to go ahead and order both. I figured I’d try them both out, see which ones I liked best, and return the others.

They arrived today, and it didn’t take long to make my decision. I expected… no, hoped… that I would prefer the closed HD448s, because I prefer the idea of closed cans. But in comparing them I discovered just how many other factors are in play.

From the moment of opening the package, it’s clear that the HD555s are higher-end than the HD448s. The HD555s come in a cleverly designed box that opens easily by pulling a tab at the top. The HD448s are packaged in the dreaded plastic “blister pack”… the kind of packaging that can only be opened by utterly destroying it, often slicing your fingers on the razor-sharp edges that such destruction inevitably produces.

The difference in build quality between the HD555s and the HD448s is almost as immediately apparent. While both are made of plastic, the HD555s feel solid, whereas the HD448s feel like they’ll shatter into a thousand brittle pieces if you look at them too intently. The HD555s have a thick, solid cord, and the HD448s have a thin, flimsy one. Most critically, the earpiece and headband cushions on the HD555s are velour. (I had read that in a review but didn’t believe it until I saw it.) Contrast that with the shockingly thin plastic film wrapping on the foam cushions of the HD448s. I owned headphones with cushions made of this material as a kid, and all I remember about them is how quickly this film dried out, cracked and flaked off all over everything, exposing the foam rubber underneath, which itself quickly began to break off.

Another big difference in the design of these two sets is how the earpieces cover your ears. A major problem I had with the Beats was that they didn’t cover the entire ear… they pressed against the ear, which provided a nice seal to block outside noise, but it caused even more pressure on my ears (and specifically, pressed my ears against the frames of my glasses) in a way that exacerbated the headache situation. The HD448s have a similar on-ear design, whereas the earpieces of the HD555s are big enough to go completely around even my big ears, providing greater comfort. (Honestly, though, even the HD555s are proving to create some discomfort after an hour-plus of wear, but I suspect that will improve after they’re broken in a bit.)

Oh, wait… I haven’t even compared the sound between the two sets yet. I’ll give the HD448s credit… they don’t sound terrible. In fact, they sound pretty decent. But again, there’s no comparison. Side by side with the HD555s, the HD448s have a thin, flat sound, with a muddy midrange and poor stereo separation. The HD555s by comparison are sparkling with detail and present an astounding stereo soundscape.

In all, it took me more time to write this blog post than it did to compare the two headphones and make an unambiguous decision as to which set I would keep. As I write this, the HD555s are on my head, and the HD448s are already packaged up for return shipment to Amazon.

Before I go, I should note that there’s a lot of talk online comparing the HD555s (the bottom end of Sennheiser’s audiophile line) with the considerably more expensive HD595s. Some people claim that by partially disassembling the HD555s and removing an adhesive foam strip inside each can, you can dramatically improve their bass response, effectively turning them into HD595s. (There’s even a video guide to the modification.) Others respond that the foam strip is not in there to simply “cripple” the sound of the cheaper headphones (which use the same drivers as their more expensive cousins), but that it in fact protects the cones from rattling against the grille on the outside of the cans. Personally, I think the HD555s sound great as they are, though I admit I haven’t heard the HD595s for a comparison. But I refuse to believe Sennheiser would only put the foam in to make these sound worse so they can sell them at a cheaper price. There’s an engineering reason for the foam. Leave it in.