It’s another new album! This isn’t really “new” music, though. It’s a compilation of tracks I recorded this year that weren’t already included on one of the three (!) other albums or one EP that I already released this year. It’s all on Bandcamp now. And on YouTube too, actually.

I’ve gotten on a bit of a roll with my Saturday music video projects lately, and I’m starting to get just the slightest iota of traction on my YouTube channel — mostly because of silly stunts I shamelessly promote in the comments on more popular YouTubers’ videos, but possibly people genuinely being interested in what I’m doing — and I’m sure that some if not most of the, as of today, 46 (!) subscribers I have are people I don’t know personally. (I always find it easier to get people who don’t know you to engage with artistic endeavors.)

Anyway… I wrapped up my last video project, and with holiday season in full swing, I knew I couldn’t devote (counts on fingers) 17 hours to this like I typically do, so this time I managed to pull it off, start-to-finish, in two hours. Here’s how it came together.

I had a couple of inspirations at work in this. First, my ongoing interest in the broad, nebulously-defined “Synthwave” subgenre of electronic music. For me, it just means instrumental electronic music with a steady beat and sounds that are evocative of the early- to mid-1980s. (1984 is the magical year for me, YMMV.) There’s a sub-subgenre called “Outrun” that generally features a more driving beat, whereas some Synthwave music tends towards ambient or at least “moody.” It’s named for Out Run, a popular car racing arcade game released by Sega in 1986. I never really played Out Run much, if at all, because at the time (I was in middle school) my parents bought me a computer instead of the latest video game console, and I didn’t have the endless supply of quarters (or transportation to the mall) that I would’ve needed to spend a lot of time in the arcade.

Now, things are different. For the past couple of months I’ve been playing a lot of retro games on my Anbernic RG353M, and last night, after burning myself out on Mother 3, I decided to give the arcade version of Out Run a try, mainly to pay attention to the music. I found it interesting, with some surprisingly jazzy chords, an unusually complex song structure, and of course the driving beat I expected.

Earlier yesterday, I had restrung my Precision Bass with some new La Bella gold flatwound strings, so this morning I wanted to play the bass, and more specifically, I wanted to record the bass. So I picked it up and just started noodling around to come up with a bass line that used a driving 8th note pulse. I knew I was kind of inventing a chord progression as I went, but at the moment I was just focused on the sound and the shape of the bass line. I knew I needed to play with a pick — something I rarely, but not never, do.

Once the bass line came together, I knew I had something good going. It was just after 10 AM, and I decided to see how much I could accomplish by noon. I wanted to write and record an entire song, and produce a video, but I wasn’t sure I could do it all in 2 hours.

tl;dr I did. (OK, this is already way too late for a tl;dr but… anyway, just keep reading now that you’re this far.)

I retreated to the “padded room” in the basement with my bass, my laptop, and my MIDI controller keyboard. At that point I had mentally sketched out a plan to record the bass first, and then drums in the form of LinnDrum samples, and then I would just see where inspiration took me from there.

After the drums were recorded, I layered on two more MIDI synth parts using Alchemy sounds in Logic (first a pad and next an arpeggiator). And then I switched over to my Yamaha Reface CP keyboard to lay down some melodies. The melody in the A section is played with a Rhodes electric piano sound, and the B section with a Hohner clavinet sound.

And that was it! I wrapped up recording by 11 AM, had the mix done in 20 minutes, and spent about another half hour putting together the video in Final Cut before posting it to YouTube at 12:05 PM, roughly 2 hours after I had first picked up my bass with only the vaguest idea of a song in my head. Here’s the end result:

Let’s talk a bit about the structure of the song, as it’s a bit unusual. The chord progression in the A section is a 6-bar loop. The keyboard part is just alternating between a G major chord and a D major chord, but with the bass changing the root under the chords, the progression is effectively:

This is repeated 5 times at the beginning, and 4 times when it returns, then 2 times (I think… I’m writing this from memory!) at the end. Overall this section is essentially in E natural minor (or E Aeolian mode).

The last time the A section is repeated, transitioning into the B section, the bass line goes up to a B, instead of returning to E. The B section, a 4-bar loop with some syncopated chord changes, shifts the key to B natural minor (B Aeolian), introducing C# in the melody, where the A section used C natural. Here the keyboard is alternating between D major and B minor chords, with the bass playing A, F# and B, making the chord progression:

Once the overall audio-visual production was done, I just needed to add some title screens. Which, of course, meant coming up with a title. My working title was the somewhat literal and boring “Golden Strings,” which got the point across but was a bit uninspired. So I scanned my brain for synonyms. Immediately the word “Auric” popped into my head. As in Auric Goldfinger. Perfect. But then I needed a synonym for “string” as well, and there I resorted to an online thesaurus. Not because I couldn’t think of another word on my own so much as I couldn’t think of a good one fast enough as my noon deadline was fast approaching. There amongst a bunch of real clunkers — twine, cord, rope… thong, seriously? — I spotted the perfect choice: “strand.”

“Auric Strands” it is. It wasn’t hard, then, to find a font in my library that fit perfectly. (It’s Big Shoulders Inline Display, if you’re into that sort of thing.) And so the project was done, and just in time!

If you like the song, you can download it on Bandcamp. Thanks for listening! And watching! And reading!

And my cover of Herbie Hancock’s “Sly” is featured in the “Sex Ed” episode of the Risk! podcast.

I’ve also made a YouTube playlist of all of the videos from the album.

What are your thoughts on Dolby Atmos?

More specifically: what are your thoughts on Apple Music automatically playing songs in Dolby Atmos through laptop speakers?

My MacBook Pro has pretty great speakers (for built-in laptop speakers). I’m sitting here listening to Talking Heads’ Fear of Music, and I could tell immediately that there was some kind of surround effect going on. It was very disorienting — it created a physical sensation in my ears and almost started to give me a headache. Then I realized I could turn it off and instantly everything went back to normal.

I’m not entirely sure what kind of dark magic Dolby is employing with this (I’m sure it has something to do with reversing the polarity of the stereo channels or something nerdy like that), but I don’t understand why it’s being foisted upon us. It reminds me of the trend about a decade ago of every movie being made in 3-D, and even 3-D TVs that no one wanted. Eventually they caught on to the “no one wanted” part and now it’s not much of a thing. I hope Dolby Atmos on streaming services follows in short order!

Related: Why Your Atmos Mix Will Sound Different On Apple Music

My plans for this album project have ping-ponged around wildly in the 2 years since I first started planning Volume 3 of my Northern Daydream series.

Finally midway through 2022 things started to come into focus, with an emphasis on two vitally important but radically different jazz pianists who both hit their creative stride in the late 1960s and early 1970s: Herbie Hancock and Keith Jarrett.

But even as I began to see that this album needed to have a “Side H” and a “Side K,” I waffled on exactly which songs I wanted to cover, and how I wanted to approach them.

I had not planned to record any of these three songs when I laid out the project. I hadn’t even heard any of them at that point, honestly. But once I did hear them, I knew I needed to make them the focal point of the conclusion of the project.

“Mortgage On My Soul” and “Common Mama” are an interesting pair. Both are built over a similar bass ostinato — in the same key, no less — and could actually be ripe for a mashup. But I decided that was not the right treatment. I wanted to show the ways the two are different, not the ways they are alike. (Whereas you might see the result of this project overall as showing the ways Jarrett and Hancock are similar even though on a surface level their styles are very different.)

“The Magician In You” kind of came out of left field. It immediately follows “Common Mama” on Jarrett’s 1972 album Expectations, and I really like the pairing. After spending several minutes in a harmonically static, groove-based mode, it’s very satisfying to bask in the rich harmonic textures of this rock/gospel ballad.

I played up the harmonic structure here in ways I kind of wish the original had done, although I know Keith Jarrett’s style, especially at that time, was to leave listeners with only the slightest hints of the true structure underneath, allowing improvisatory group interplay to constantly pull at the loose threads of more predictable musical forms. I don’t slight him for it at all, and yet the composition is just so good that I want to get absorbed in it and let it carry me away.

And this is part of why I’ve decided to wrap up this project here. I’m ready to take on new challenges, including attempting to create a big band arrangement of “The Magician In You” that builds on the elements I put into this version. So, this probably means I will step away from spending 18+ hours on a Saturday, twice a month, on an epic recording/video production session. For a while, anyway.

And you can listen to — and watch — the entire album here.

Once I’m satisfied that the mixes for the album are final, I’ll post another update with download links. Stay tuned! 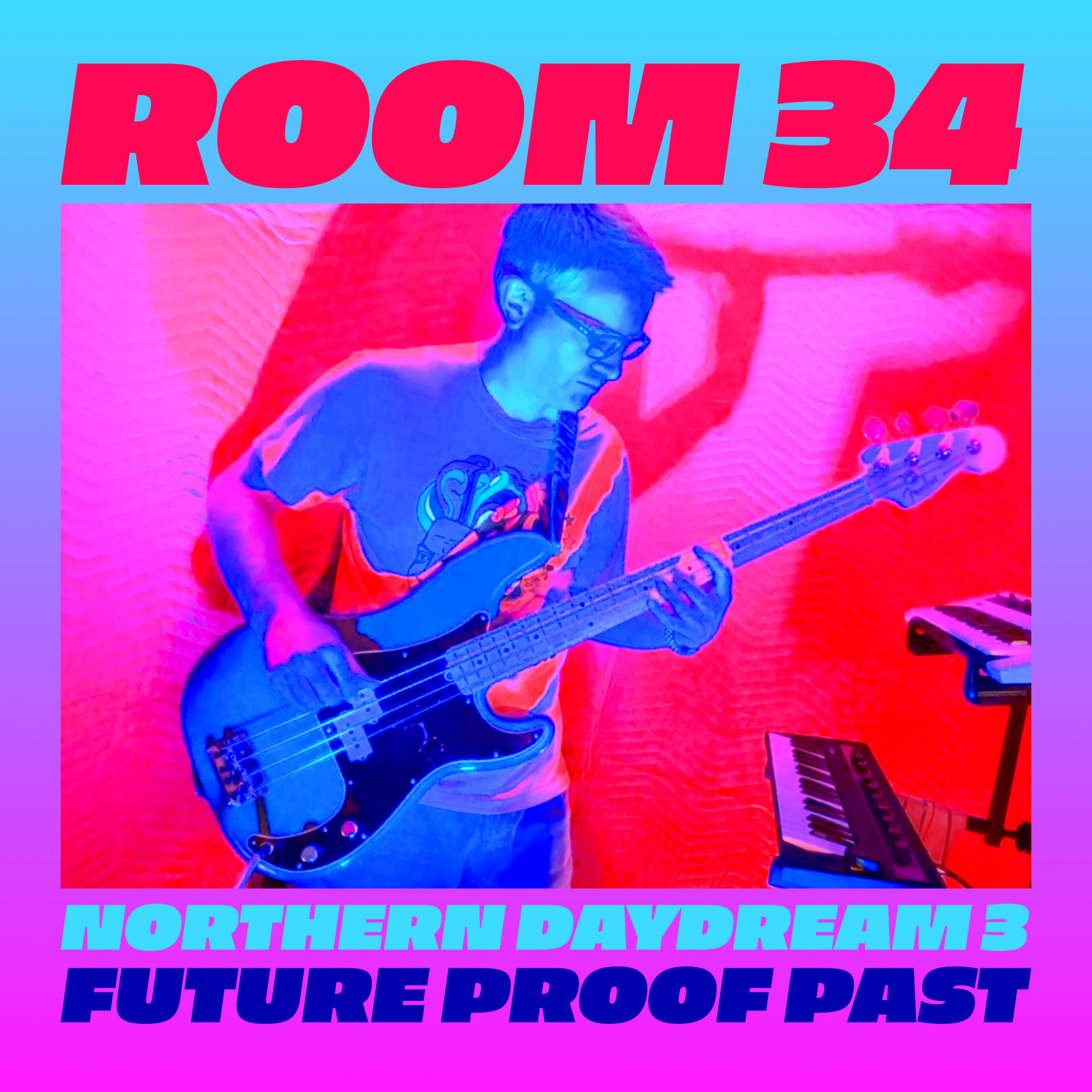