I got my first bass — a black Fender Standard (MIM) Jazz Bass — when I was in high school. It wasn’t perfect, but it was a great starter bass. And even though I didn’t really like the black body — I’ve always found black and sunburst to be the most boring and overused guitar finishes — I loved that bass until I could afford to buy a better one, ten years later.

But I always felt like that bass was flawed because of something that was my own fault. I was a curious kid, and one night I decided to take the bass apart. I mean, absolutely as far apart as I could. I removed the strings, the neck, the pickguard, the control plate, the pickups, the bridge… I think I even removed the tuning machines and bridge saddles. And then I put it all back together again.

Basically, I just thought it was a mediocre instrument, when in fact I had made it that way.

The lesson I learned was that I should not make any adjustments to my instruments, and it took me decades to get over that.

Fast forward to 2019. I’ve been playing bass in a jazz quartet for a couple of years now, and I’ve been buying new basses! For the past decade I’d owned a really nice Fender Jaguar Bass (MIJ) — red with matching headstock and block inlays — and a kind-of-crappy 5-string MIM Jazz Bass. I decided since I was playing jazz, I needed a fretless, so I went for a minimal expenditure and bought a Squier Vintage Modified Jazz Bass.

I couldn’t believe how good the Squier was for the price! Better than my MIM Fender! So I decided to sell the 5-string. I was hardly playing it anyway. I was curious about short-scale basses, so I bought a MIM Fender Mustang. But I hated it. The quality was crap. I don’t know what’s going on in Fender’s Ensenada factory these days, but I’m not impressed.

For those who don’t know, Squier is Fender’s entry-level sub-brand. Originally a mid-level line made in Japan, then for many years they were very poorly made in China. These days, I’ve since learned, they’re mostly made in Indonesia, using mostly CNC robots (rather than overworked and mistreated human laborers) to keep costs low but consistency and quality much higher than their reputation would lead one to believe.

I also realized short scale was a bad choice if I was simultaneously trying to regain my feel for fretless, so I returned the Mustang and bought… a Squier Vintage Modified 5-string Jazz Bass. It’s also surprisingly great!

Then earlier this year I sold the Jaguar and upgraded to my first ever Precision Bass, an American Professional. It looks just like the bass I learned on that I borrowed from my high school, before I got that first black Jazz Bass. I love it!

But that got me thinking… now that I have a nice solid American Professional instrument, I wanted to tinker a bit with another bass.

As good as the Squier fretless was, I hated two things about it: the synthetic fingerboard material (it just didn’t give enough of a “woody” sound), and the boring sunburst finish. (See above.) By now I’m comfortable adjusting the neck tension, action, tuning, and pickup height, so the idea of doing some customizations (just not to my expensive American Professional!) is not intimidating anymore.

For 2019 Fender introduced a new “Classic Vibe” Squier series, and there I saw the bass of my dreams… a “Daphne blue” Jazz Bass. But it only came in fretted. So I decided this would become the basis for my Frankenstein monster!

Fast forward a few more months, and now the monster is complete. Pretty much the only parts of it that are still the original Squier are the blue body, the tortoise shell pickguard, and the control plate. Everything else is new, with the exception of the tuning machines, which I stole off the Squier fretless (I’ll get to that). 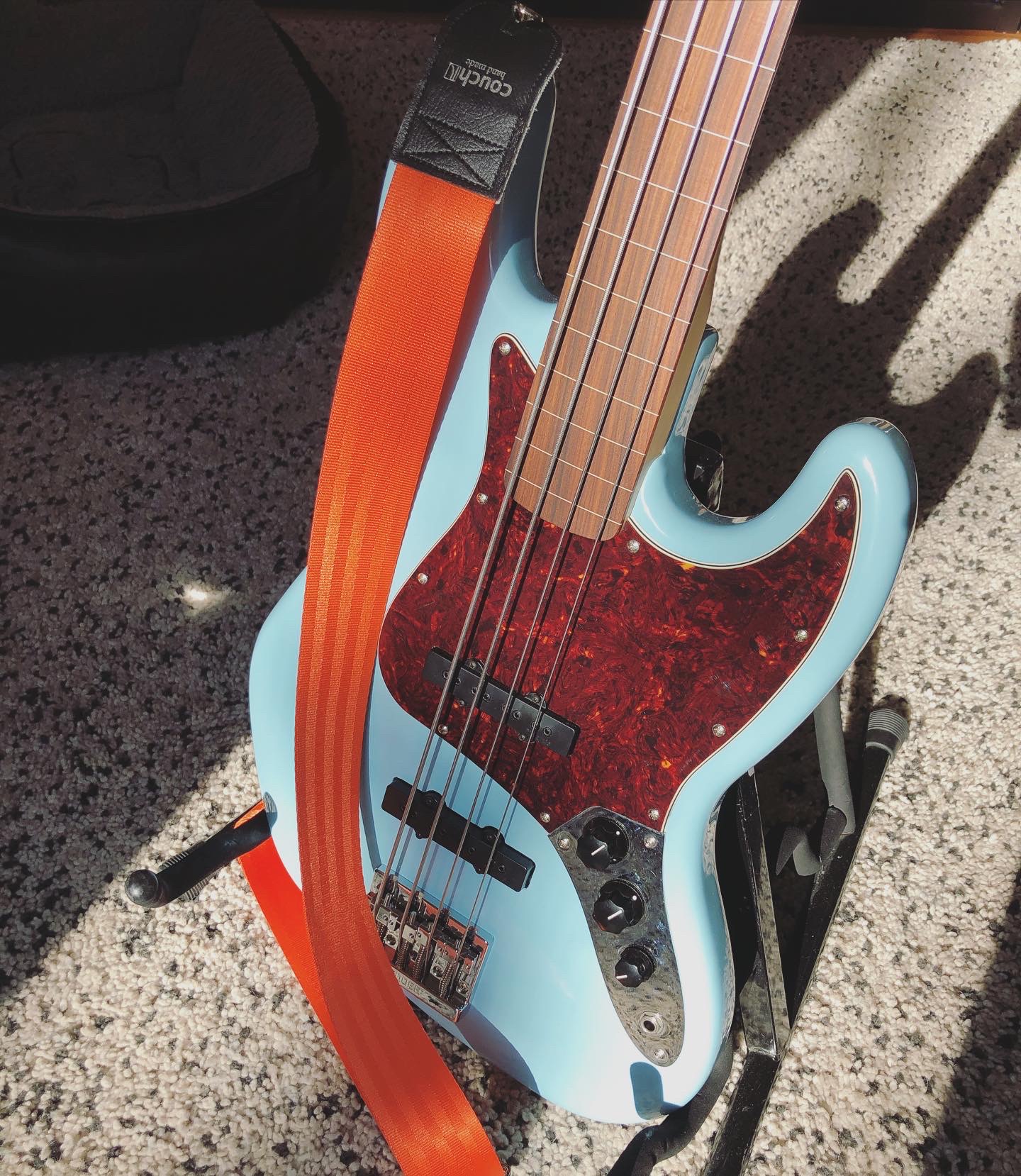 I just love that look of the Daphne blue body paint with the tortoise shell pickguard. That was the inspiration to make all of this happen! 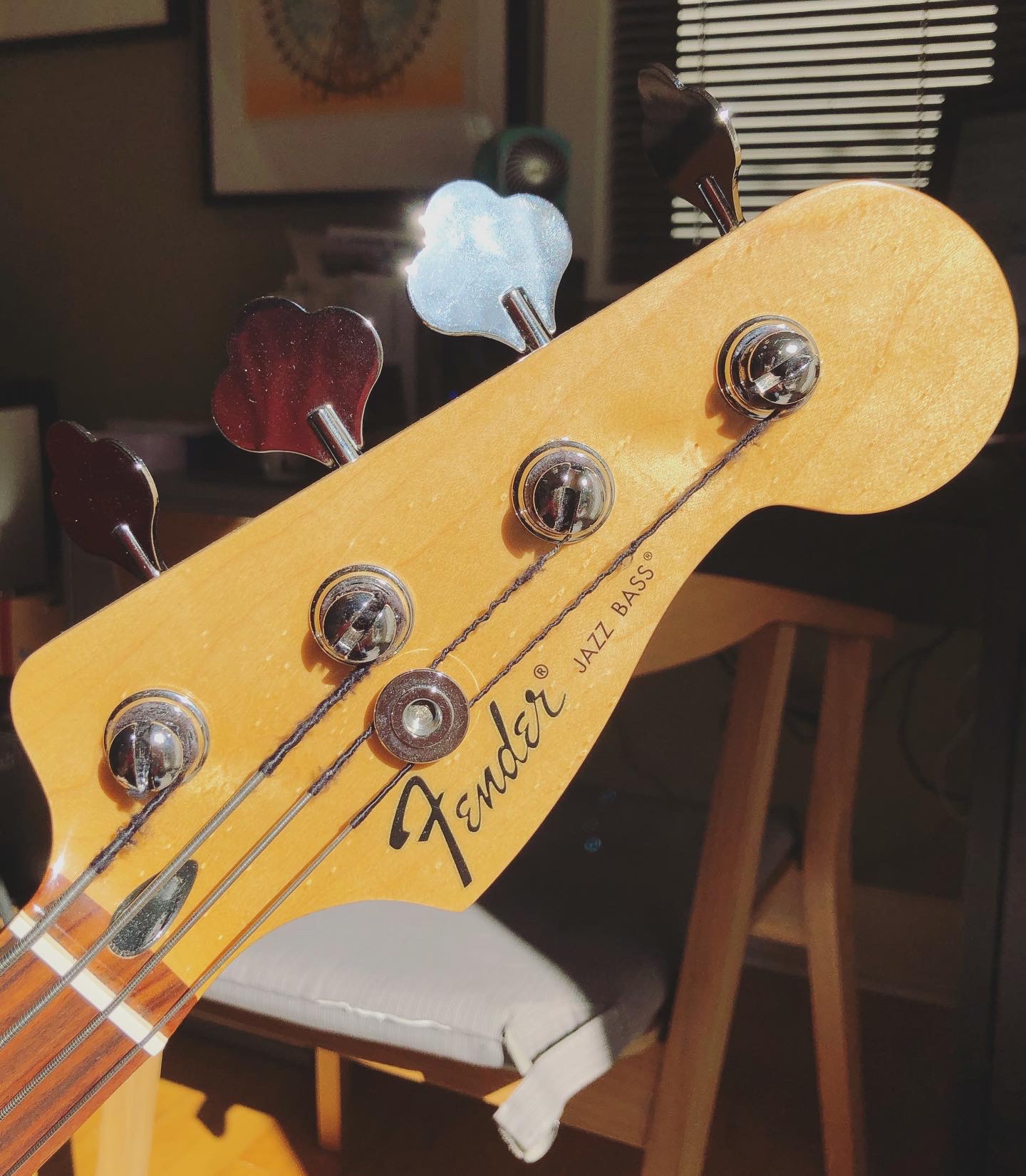 Yes, there’s a bit of headstock vanity, as much as I’m ashamed to admit it… gotta have that Fender logo! But the main reason I wanted this Fender neck, instead of just sticking the Squier fretless neck I already had onto this (which I did, initially), was to get that nice rosewood fingerboard. 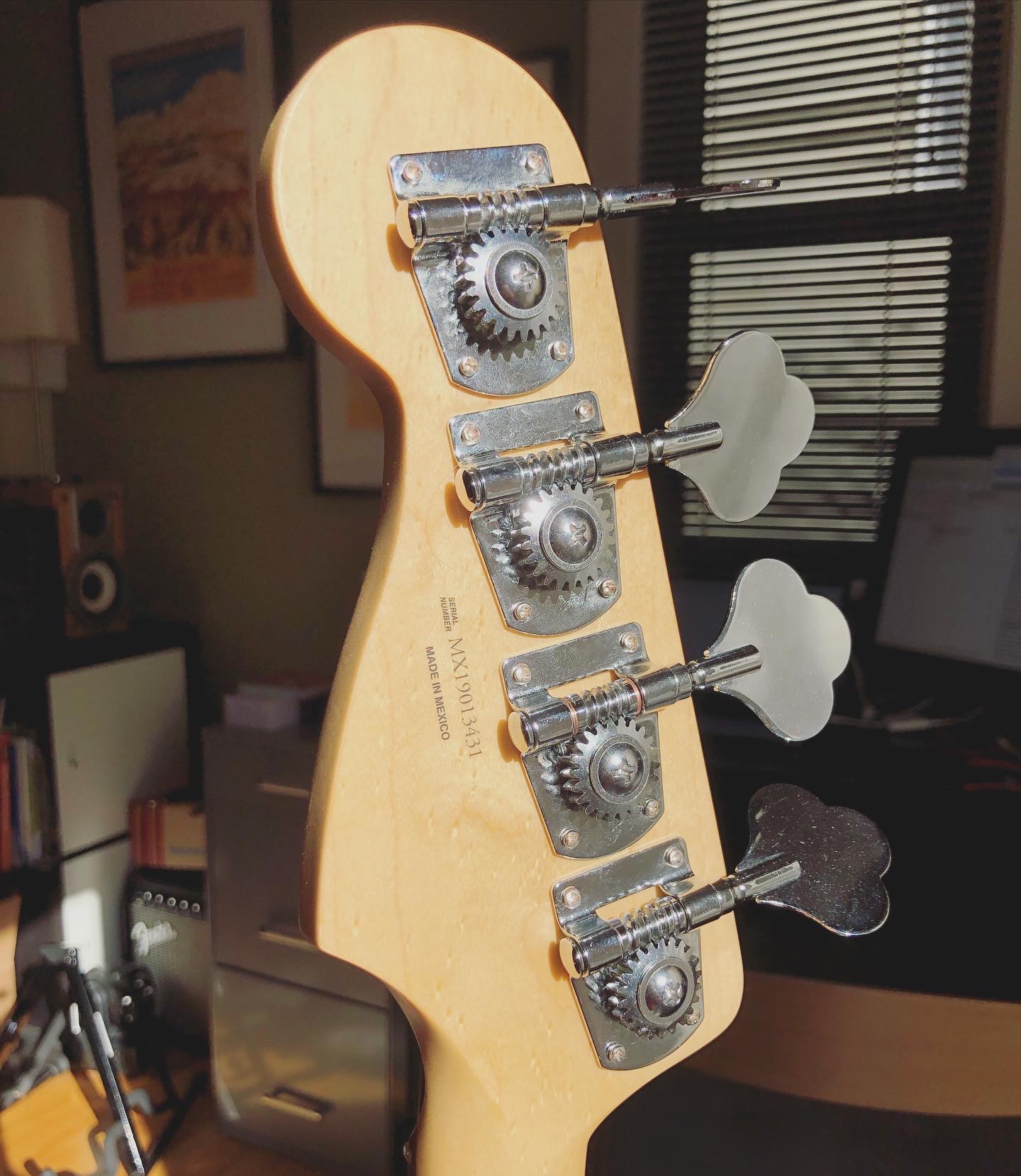 Funny thing… when you buy a stock neck from Fender, they really just send you the neck. It just has 4 holes in it for the tuning machines, but you have to supply those yourself. I could have bought a set, but I figured I’d just use the ones from the old Squier fretless neck that I didn’t need anymore. Of course, the screw holes didn’t line up quite right, so I had to drill new ones. 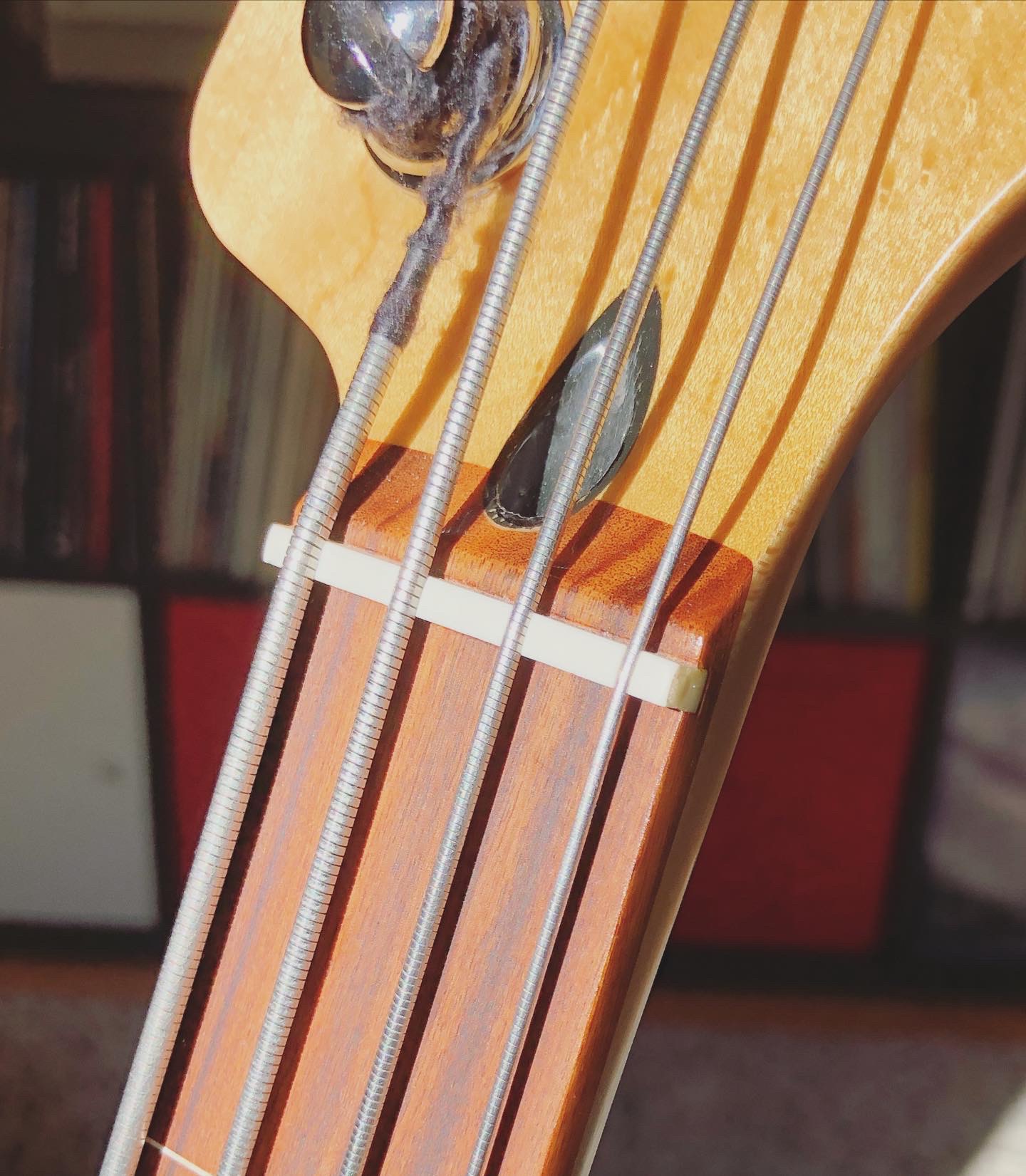 Nuts. The other thing about the stock neck is that the string grooves in the nut aren’t really there… just little pilot notches. You’re supposed to file it down yourself. But a set of nut files is like $80! I considered buying some, but then I learned that this synthetic nut material is soft enough that you can actually “file” it with a set of roundwound strings… so that’s what I did! (I play the fretless with flatwounds.) It’s not totally perfect, but it worked surprisingly well and didn’t cost a thing! 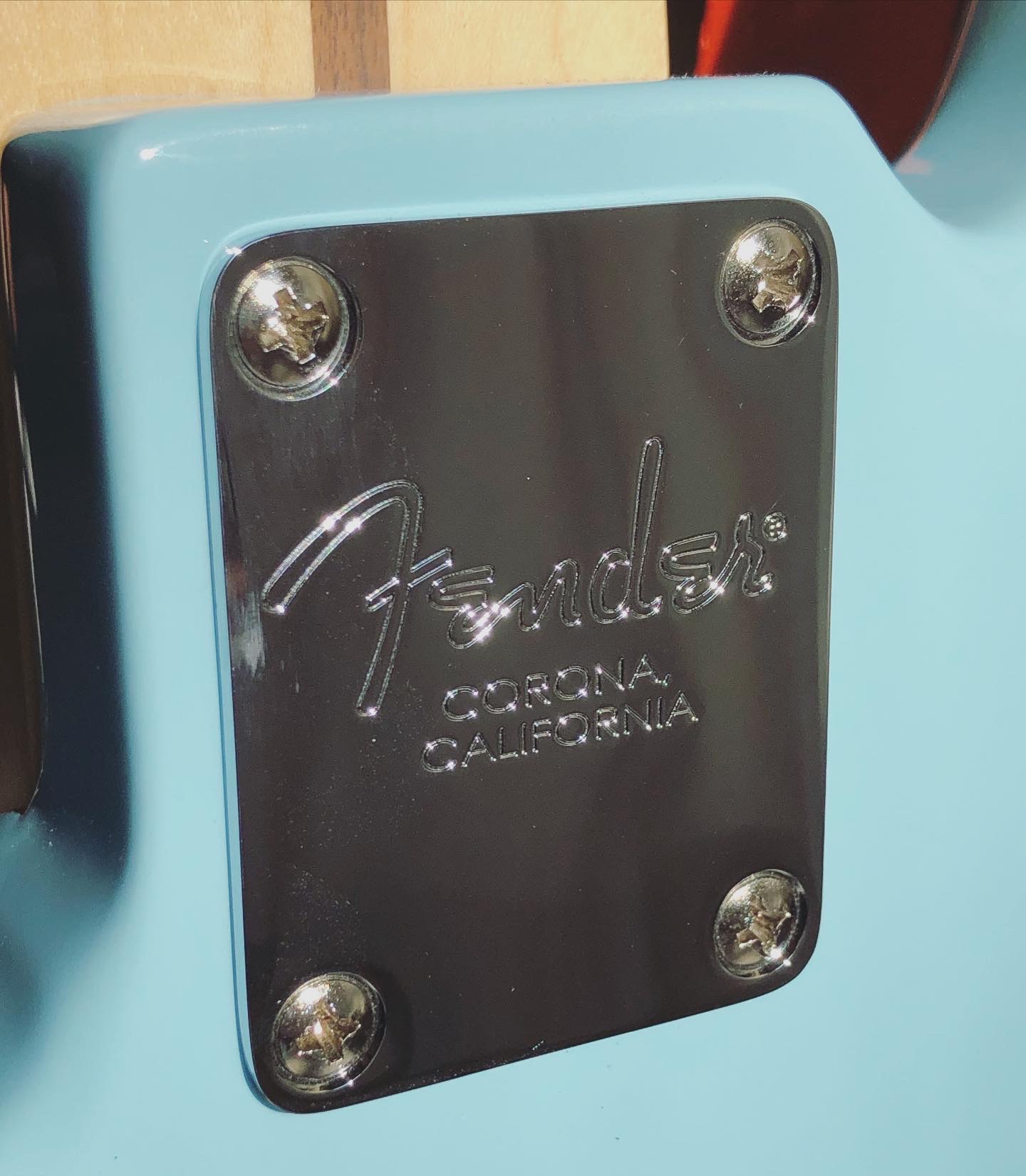 Seriously? Did I really need to swap out the neck mounting plate? Well, yes and no. No, of course I didn’t. But I kind of wanted to, to get rid of any traces of “Squier.” But there was actually a good, practical reason for this. I wasn’t 100% sure the screw holes for mounting the neck would line up properly between a Squier body and a Fender neck. I was pretty sure they would. But not positive. This was an inexpensive (about $15) way to confirm that it would work, before spending a couple hundred bucks on a neck. It worked! 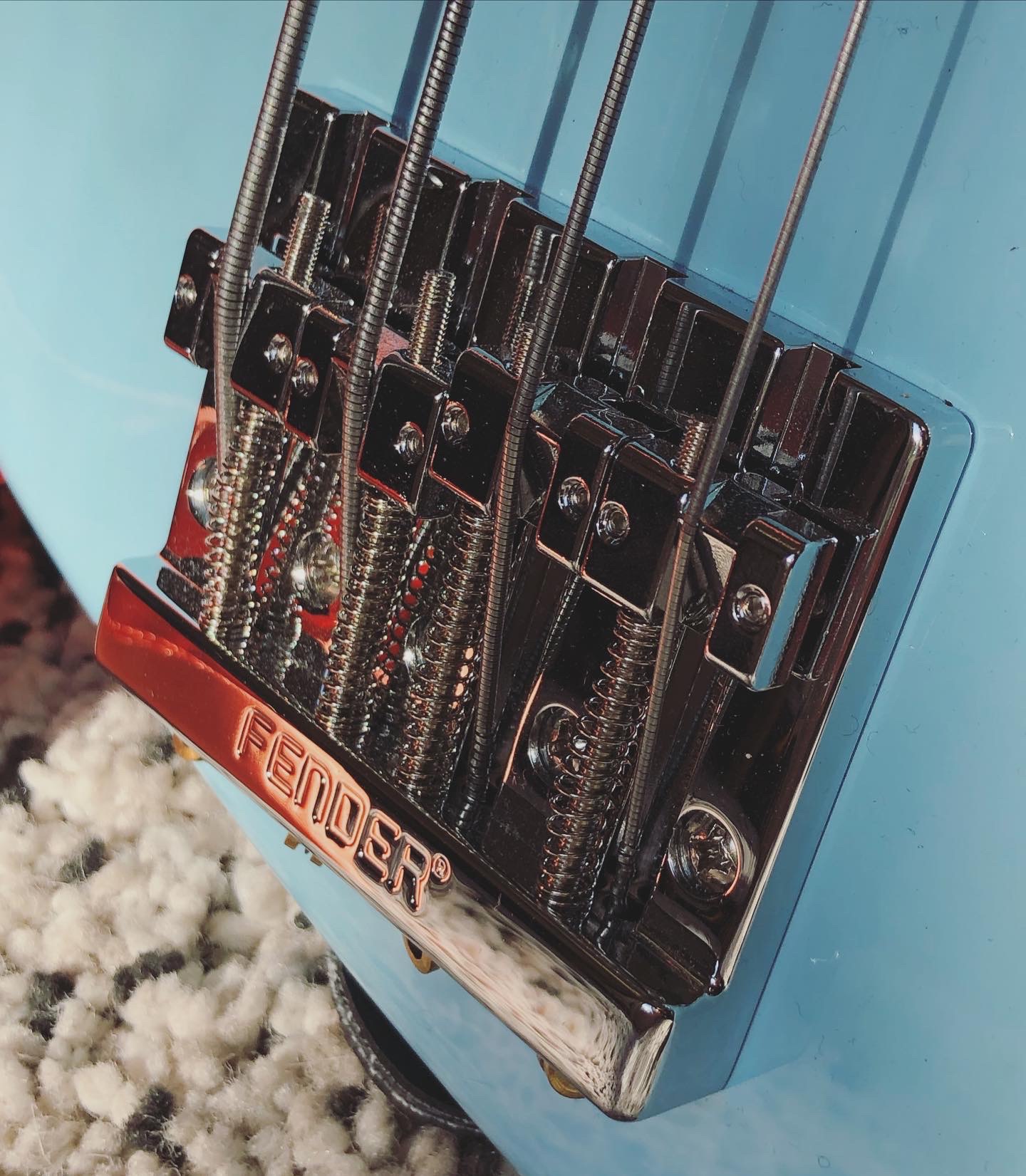 A Fender hi-mass bridge. The stock Squier bridge was perfectly fine, but I didn’t care much for the changes they made to the bridge saddles with the Classic Vibe series. Initially I swapped in the saddles from the Vintage Modified fretless, but a hi-mass bridge is not a huge investment and it does improve sustain… plus it just looks better. 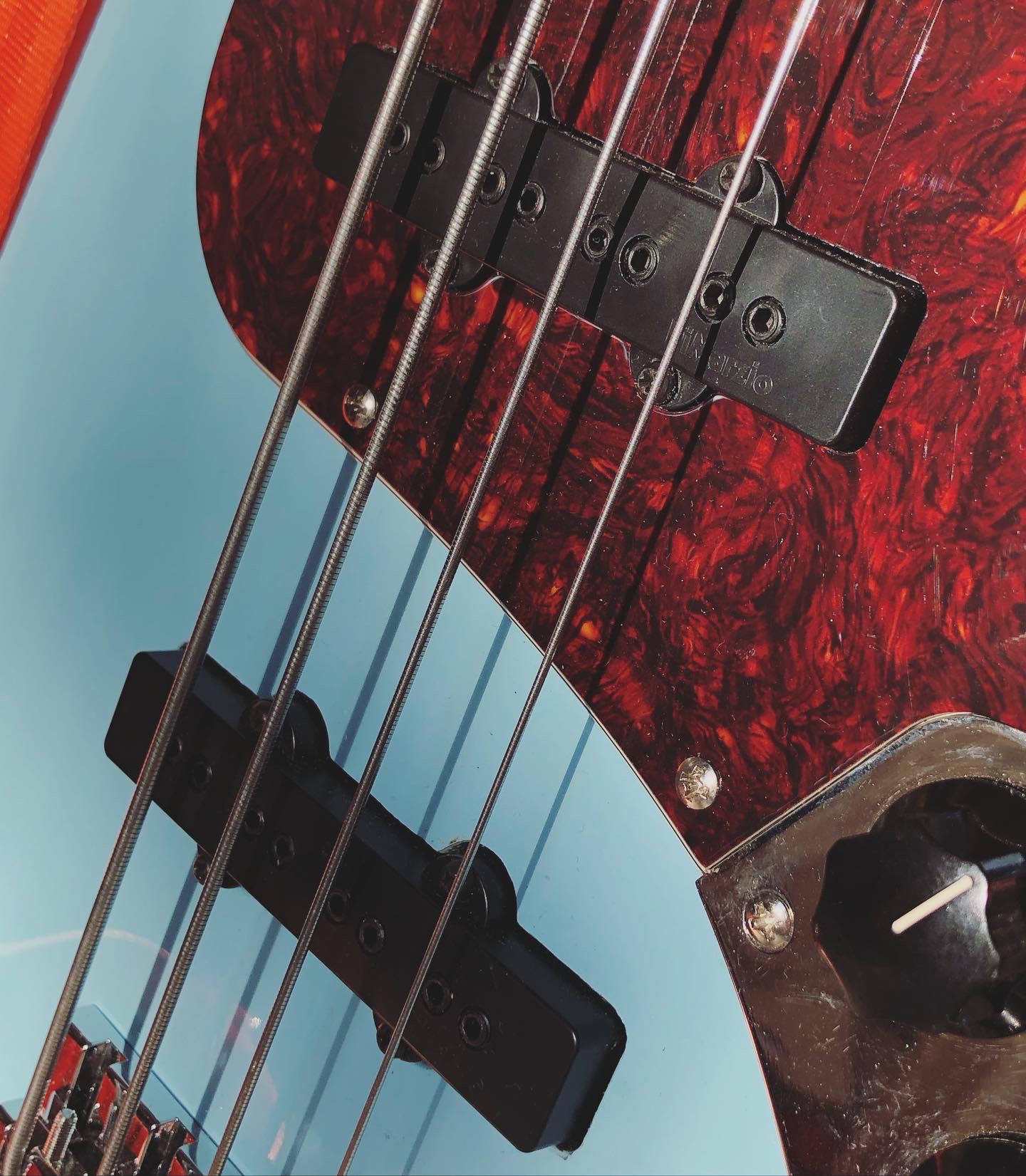 DiMarzio noiseless pickups. Without a doubt this was the best upgrade across the board. The stock pickups just had kind of a weak and undefined sound… it was impossible to get that classic Jazz Bass “twang” from the bridge pickup. Plus you could never really solo one pickup because the 60 Hz hum was awful! These pickups are a lot hotter than the stock ones and give a very distinctive tone. But most importantly, they’re wired as split coils so there’s absolutely zero hum with one pickup soloed!

Of course, there’s always something. These pickups are taller than the stock ones, and they couldn’t be seated low enough to have the proper distance from the strings. I needed to rout out the body cavities deeper for them. But I don’t own a router, or a drill press, or anything that you should probably have to do this job right. But I was determined to handle this the way I’ve handled everything else on this project: fast, cheap and out of control. I found the most suitable bit I had on hand for my hand drill, and set to work removing wood. The end result was pretty ugly (and honestly, still not quite deep enough), but it’s hidden, and now things look and sound great!