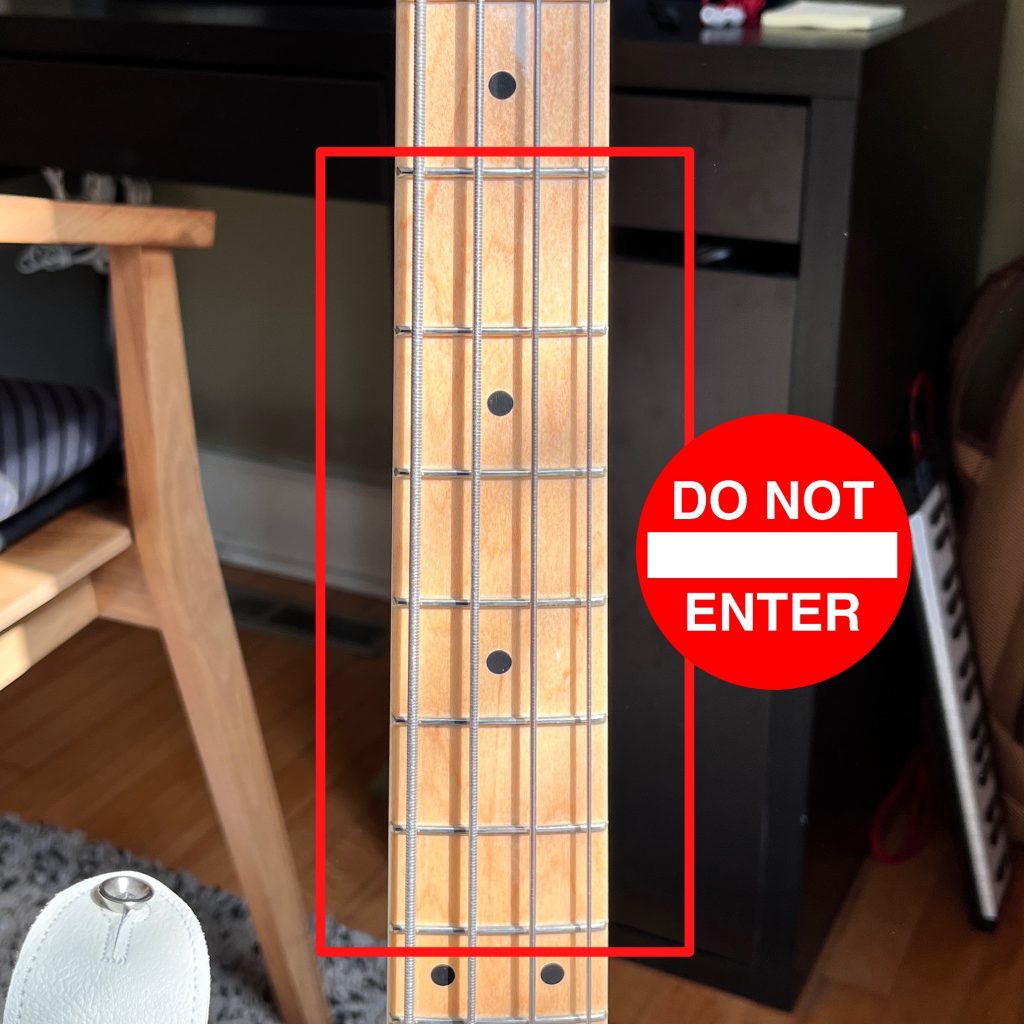 After two years of mostly not performing (or even interacting) with other people, suddenly I find myself thrust deeply into both.

I’m currently rehearsing on bass with the Minneapolis South High Community Jazz Band for a concert in the park on June 3, and I’ll also be playing bass in the pit orchestra (which is neither an orchestra, nor will it be in the “pit” for this show, but on stage!) for Summerset Theatre‘s production of the Queen jukebox musical We Will Rock You in Austin, Minnesota at the end of June.

Going into this, I figured the jarring proximity of other people in the post- (or, ongoing-) covid era would be the hardest thing for me to handle about the experience, but sight-reading sheet music for bass is reminding me of a much more enduring challenge.

I formally studied clarinet from 5th grade through my senior year of college, and I played saxophone in school jazz bands throughout high school and college as well. I was a music major, to boot. But I am entirely self-taught on bass (including reading bass clef), having mostly just played it in rock bands since first picking it up as a sophomore in high school so I could emulate Geddy Lee and Chris Squire.

I would label my bass skills as “intermediate” in general, maybe “intermediate-plus” if I’m feeling generous to myself. But I have three major weaknesses: occasional struggles to coordinate my left and right hands, less-than-instant recognition of notes above the staff in bass clef, and most significantly, a fear of the 6th to 11th frets.

It’s amazing how far you can get playing rock music and rarely venturing above the 5th fret (or outside of the 12th to 17th frets, which are easy to mentally map to the first 5). I have an immediate, instinctive recognition of where the notes on a piece of sheet music in bass clef are on the bass neck, if I’m thinking about the first 5 frets.

The problem is, jazz and musical theater expect a bit more out of a bassist. The past few years of playing in the jazz band (and having played in the pit for Summerset’s production of The Little Mermaid in 2019), along with numerous gigs as a part of 32nd Street Jazz, have forced me to finally learn the middle of the neck. But I still don’t have that immediate instinctive recognition of where the notes are.

And the weird thing about guitar and bass, compared to woodwinds, is that there are multiple places to play just about every note. So when you’re playing, say, a second line B-flat, you need to consider, “Am I going to play this on the 1st fret of the A string, or the 6th fret of the E string?” That consideration depends a lot on what comes next. If the line suddenly soars up to, say, a D above the staff, you really need to be on that 6th fret.

So far so good. If there are just a few sporadic notes, or a repetitive pattern, that sits best in the middle of the neck, I can get that down. But when there’s a fast run with a bunch of accidentals, I’m still just not tracking fast enough to pull it off. Until I have a part down cold, I often find myself in rehearsal panicking in the middle of a measure and quickly dropping back to the first 5 frets, where I immediately know a top-line A-flat is the 1st fret on the G string, for instance. Never mind the fact that in 2 beats I’m going to need to be up at the 9th fret. Eek!

It’s easy to get stuck for a long time as an “intermediate” bassist, especially if you’re in your 40s and not making a living as a musician, because there’s a big bump in the learning curve to get to that advanced level.

But maybe I’m just being too hard on myself. After all, other people are letting me play bass in these situations, so I must be doing it adequately. Right?