I am convinced that Facebook designs its user experience (UX) as anti-user experience. Their goal is not to make their site intuitive, friendly and convenient. It’s not to surprise and delight. (Well, surprise maybe.) It’s all about doing everything it can to dangle just enough of a carrot in front of you that you’ll click more times than you want to, exposing yourself to more ads, which translate to more revenue than they could reasonably justify if the advertisers knew just how brief and worthless those “impressions” really are.

Anyway… here’s an example of the latest annoyance, in the form of a Your Memories on Facebook block. This is what I saw in my browser window: 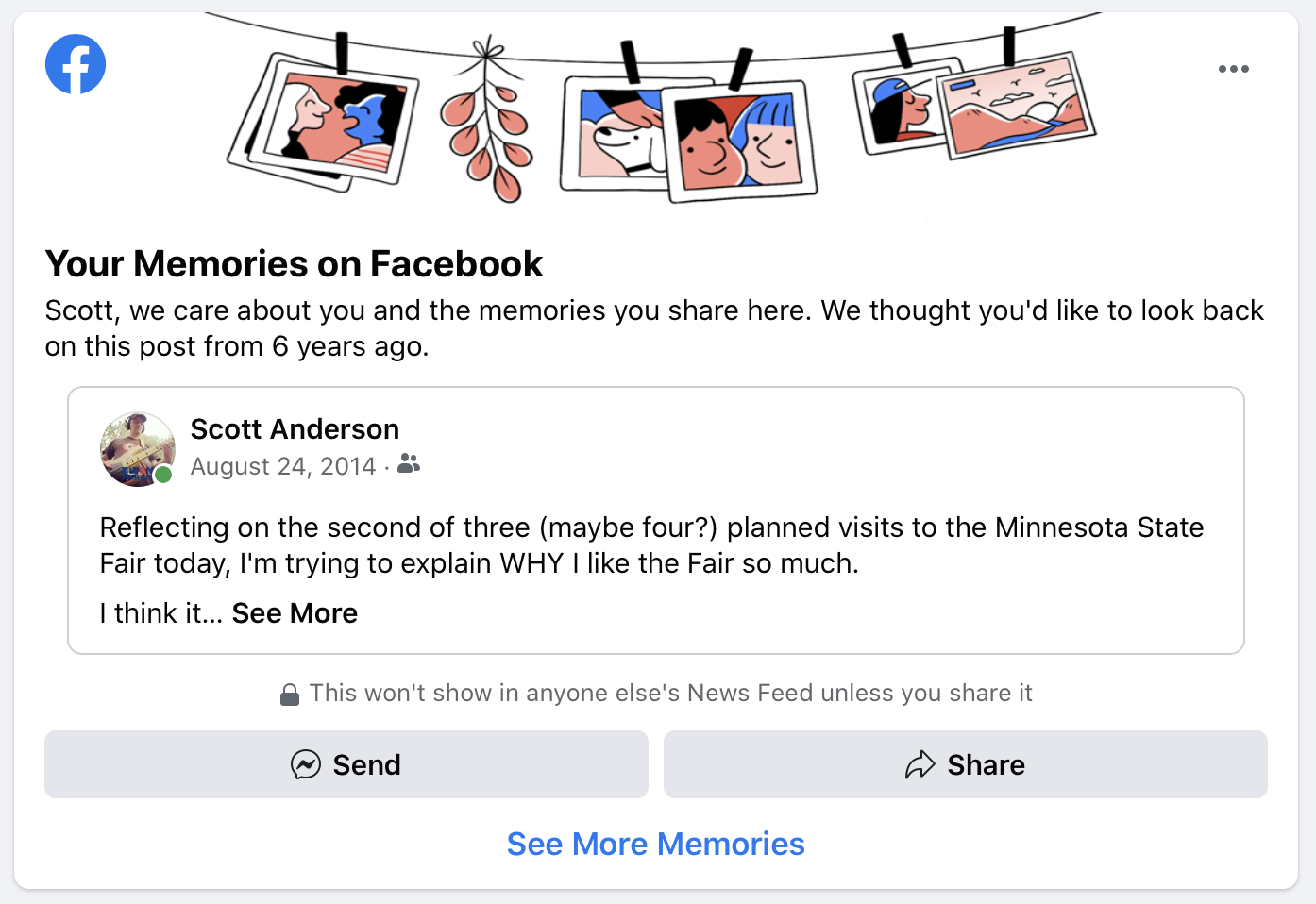 It’s an extremely brief teaser of and old post of mine that, yes, I actually am interested in seeing, since I am really missing the Minnesota State Fair this year. So I click on See more… but nothing happens.

I’m sure most users are just utterly confused by this, and may or may not understand that what they’re seeing is a preview of what their friends will see if they share this “memory” on their timeline. It doesn’t matter if they understand or not though, because Facebook has done enough user research to know that they’ll still keep clicking things to try to see more, leading them to the only links here that actually do anything, the Send and Share buttons. 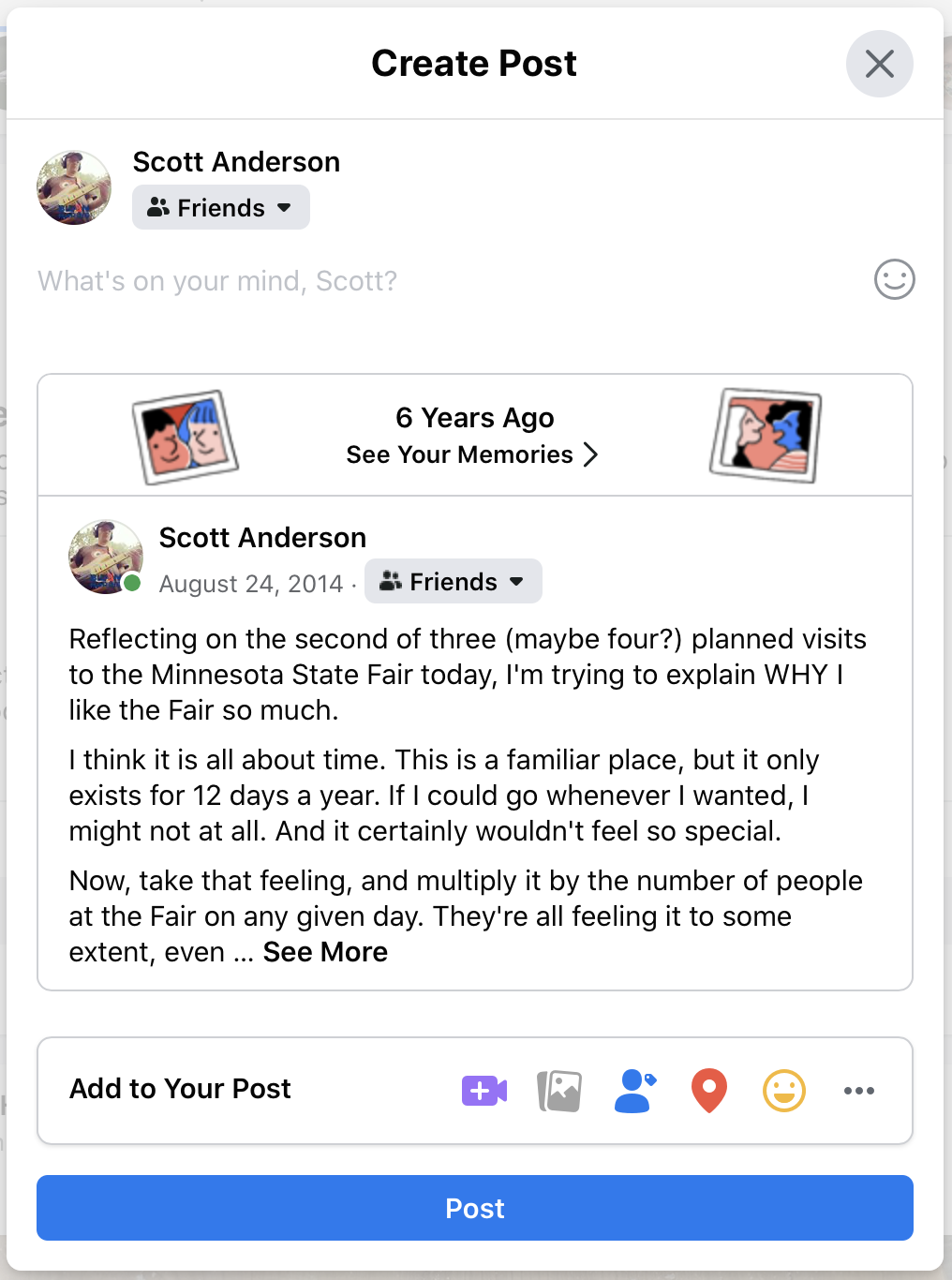 Clicking Share pops up another window that shows a bit more of the post, but still not all of it, and another non-functional See more… “link”. But the only way to actually see the entire post is to share it on your timeline. Which is the only thing Facebook wants you to do here, because it “drives engagement”.

I’d insert an eye-roll emoji here but I’ve turned off that feature in WordPress, because I hate every part of everything right now.

Since I’m sure you’re dying to know how this all ends… here’s a screenshot of the shared post on Facebook. 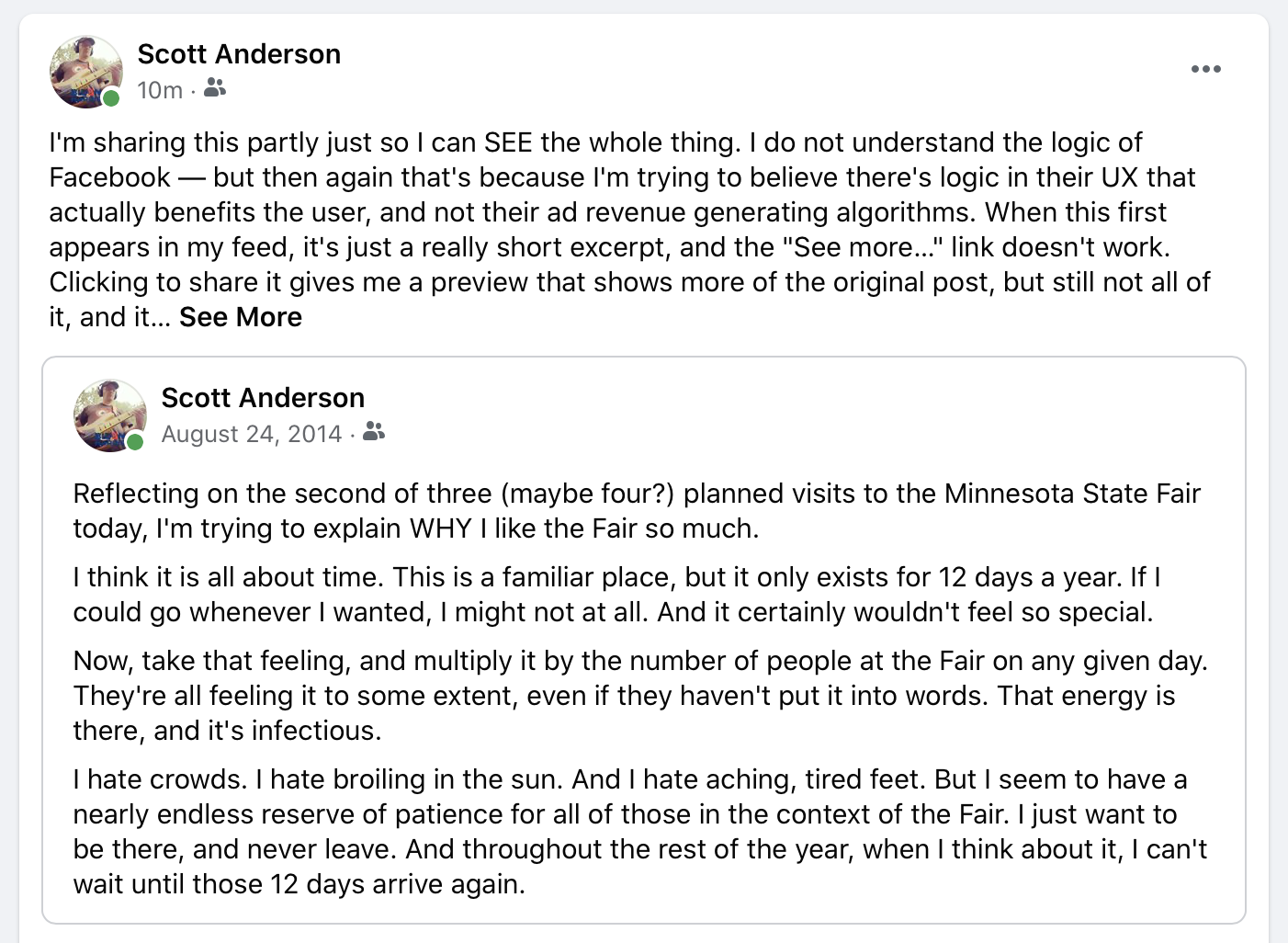 Much like “Dr. Heckyll” in the Men at Work song, I am my own little guinea pig.

This week Facebook released an official WordPress plugin that promises deep integration. Vaguely lewd as that may sound, it’s something I need to pursue. I keep Facebook at arm’s length, but as a web developer I cannot deny that it is by far the most popular — nay, ubiquitous — social network out there. Social network integration is a big part of what my clients want with new websites, and the more we can take advantage of these kinds of tools, the more we can achieve those goals.

And so, here I am, finding myself trying out just about everything the Facebook WordPress plugin can do, right on my very own blog. Eventually I’ll probably turn off most or all of these features, but before I do that I need to find out what they do, so I know which of them are right for my clients.

Update, about 3 seconds later… I’ve already turned off the first of the “features” of the Facebook plugin: comment integration. I have already been happily using Disqus for my comments, and Facebook (unsurprisingly) doesn’t play nicely with it.

Oversharing is an inherent part of social media. Just ask anyone who’s made the mistake of clicking a Socialcam link on Facebook.

But oversharing takes different forms, and the most potentially dangerous type is one many people don’t even realize exists: the copious logging of your online activities by the social networking sites you’re logged into. Thanks to their “deep integration” with other websites, you may be “sharing” your browsing habits with Facebook, Twitter and Google even when you’re not on their sites.

Have you ever been on a site and noticed a little corner of the site looks like it’s been invaded by Facebook? That sickly blue, the font, the little profile pictures of your friends who’ve liked or commented on the page you’re currently viewing?

How did that get there? It’s because the site is integrating with Facebook, and through the magic of cookies, Facebook’s servers can tell that it’s you looking at the page and deliver content customized to your profile. Maybe you like that, but I find it a little creepy. Twitter and Google do it too, even if it’s not as obvious.

Google may be the most insidious, with so many of its tools now consolidated under a single login. If you use Gmail, and you keep your account logged in, every Google search you do is logged. Ostensibly this is to help deliver “personalized” results. More crassly, it is used to put “targeted” ads in front of your eyeballs. But that data is being collected, and regardless of what Google says their privacy policy is now, the data is there, and could stay there for a long time. Someday Google might change their policies or sell that data or the government might subpoena it or just come in and take it.

What’s worse, Google Analytics is everywhere. Heck, even paranoid old me uses it. Google says Analytics isn’t tied in with your Google account, and maybe it’s not… yet. But why assume it will always be that way?

Fortunately, there’s something very simple you can do to combat all of this data collection. It’s the online equivalent of a tinfoil hat, except it actually works. Log out. And just to be safe, clear your cookies.

I’m trying something out right now that takes all of this even a step further. It all hinges on the fact that in all three of these cases — Facebook, Twitter and Gmail — the web interface is probably the least usable, least satisfying way to experience these services. I’ve never really been a user of Gmail’s web interface; I’ve always preferred using the Mac’s built in Mail application. But now I’m also strictly using the Twitter app on my Mac. (I already use Tweetbot on my iPhone.) And I have made the decision not to use Facebook on my computer at all. I already hated the Facebook web experience anyway, so why bother with it? Now I am only going to check it using the Facebook iPhone app.

Picking up where the last post left off, this morning SLP and I were discussing the frustrations some people have with Twitter, and their frequent inclination to dismiss it wholesale as a result. One of the biggest complaints always seems to be that you “can’t say anything” in 140 characters. That the brevity of a tweet naturally leads to flippant, ill-considered, 2 short & hvly abbrvtd, or just plain pointless missives fired into the vast, chaotic fray of similar voices, loudly saying nothing.

As I usually do at this point (although maybe she beat me to it this time), I brought up haiku. Most haiku poems could easily fit within the 140-character confines of a tweet, but few people dismiss the haiku form as too brief to convey meaning. In fact, I was inspired to compose a haiku on the topic of Twitter itself, which I subsequently tweeted, of course:

Of course Twitter, like all forms of communication, has limitations. And of course some of what ends up on Twitter is pointless babble. Just because someone gives you the tools doesn’t mean you know how to use them. But to dismiss the entire platform simply because it has constraints or because you don’t like the way certain other people are using it is as silly as dismissing haiku because you can’t write a dissertation in 17 syllables.

But sometimes that’s all you need. Is this 262-word blog post really more effective at communicating the merits of Twitter than my (as SLP called it) twaiku?